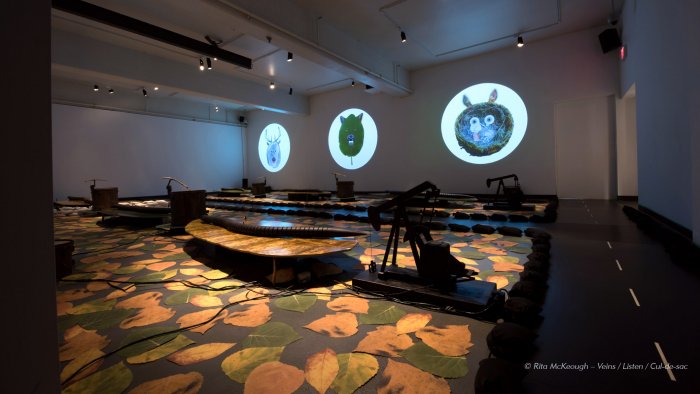 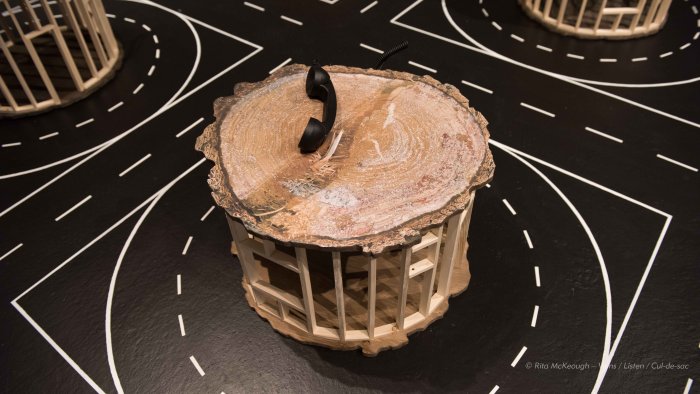 Inter- disciplinary artist Rita McKeough has been the artist-in-residence for the 2017 summer programming presented by the Comox Valley Art Gallery with the support of partnering organizations North Island College Fine Arts Department and the McLoughlin Gardens Society.

During her creative residency McKeough has continued her research, as she developed site-responsive elements to her installation titled Veins. This body of work is an installation composed of lands the artist is deeply concerned about. This exhibition offers an immersion in a landscape where the paradox between a healthy natural world and human systems of capitalism, production, consumption can be contemplated. McKeough has also developed two new installations to support and extend Veins: Listen, installed in the CVAG window gallery, and Cul-de-sac, housed in the George Sawchuck Room.

“Listen — The birds have gathered at the mouths of the megaphones that have emerged from the dirt. They draw closer, to listen. There is a pulse, a pumping sound, and a blackness seeps into the dirt and spreads through its veins. The birds are uneasy, they listen carefully. They are thoughtful as they approach the microphones, they repeat what they have heard trying to decipher and translate this complex and urgent message.

Cul-de-sac — The street is a dead end. The trees have gathered in a circle, facing outward perhaps to defend themselves. Soon a new neighbourhood. The trees will be renovated, framed up, skeletons ready to be inhabited.”

Calgary-based audio, media installation and performance artist Rita McKeough has exhibited throughout Canada since the late 1970s. Her work has been featured in Radio Rethink: Essays on Art, Sound and Transmission (Banff Centre for the Arts, 1993) and Caught in the Act: Canadian Women in Performance (YYZ Books, 2004). (ML) Born in Antigonish, Nova Scotia. McKeough studied printmaking and sculpture at the University of Calgary where she received her BFA. She went on to study at the NSCAD University where she was awarded her MFA. Her experience as a radio station disc jockey and drummer for bands led to her introduction of sound elements in her elaborate installations and later to the development of electronic and mechanical objects in interactive environments. She is currently in the band Sleepy Panther with her wonderful friend Richard Brown and teaching at The Alberta College of Art and Design. Rita insists that she has been fortunate to have the support and assistance of her friends and community to produce her work.