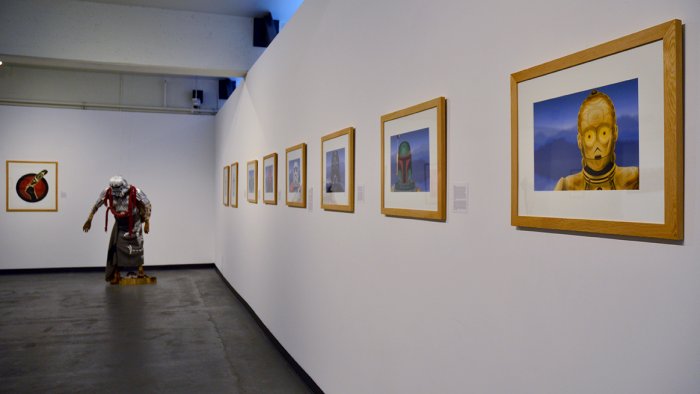 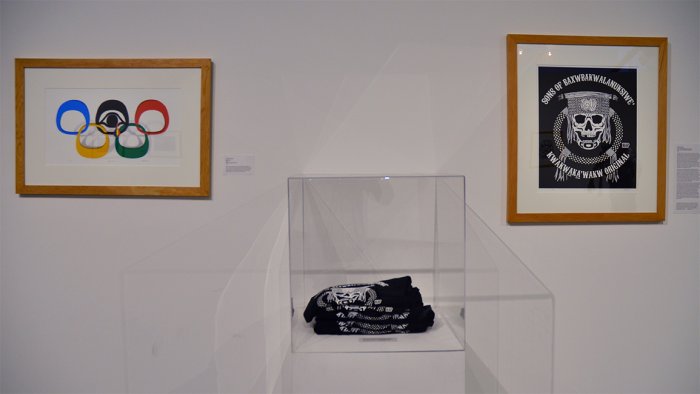 Andy Everson presents an exhibition of two-dimensional printed imagery, paintings, wearable art and sculpture. Utilizing pop culture references in combination with First Nations imagery, Andy is interested in raising awareness and stimulating dialogue about issues faced by First Nations people today. Andy is keenly interested in drawing forth issues surrounding appropriation, ownership, power, resistance and worth in his work while presenting his pieces in a way that is accessible to the viewer through its often humorous undertones. Many of the pieces selected have had a viral existence through social media and thus encapsulate much of what it means to be an Indigenous artist in the world today.

Andy was born in Comox and named Na̱gedzi after his grandfather, the late Chief Andy Frank of the K’ómoks First Nation. Andy has also had the honour of being seated with the ‘Na̱mg̱is T̓sit̓sa̱ł’walag̱a̱me’ name of Ḵ̓wa̱mxa̱laga̱lis I’nis. Influenced heavily by his grandmother, he has always been driven to uphold the traditions of both the K’ómoks and Kwakwa̱ka̱‘wakw First Nations. In this regard, Andy has pursued avenues where he can sing traditional songs and perform ceremonial dances at potlatches and in a number of different dance groups, most notably the Le-La-La Dancers, the Gwa’wina Dancers and the K’umugwe Dancers. Pursuing other areas of traditional culture has also led Andy to complete a Master’s degree in anthropology. Because the K’ómoks First Nation lies on the border between the larger Salish and Kwakwa̱ka̱‘wakw realms, his thesis focused on notions and expressions of contemporary Comox identity. His work in anthropology provided him with a background in linguistics which subsequently inspired him to create a company, Copper Canoe, Inc., that specialized in the creation of Aboriginal language media. Andy feels that his artwork stands on par with these other accomplishments. The ability to create and print most of his own work has allowed Andy to explore and express his ancestral artwork in a number of contemporary ways.