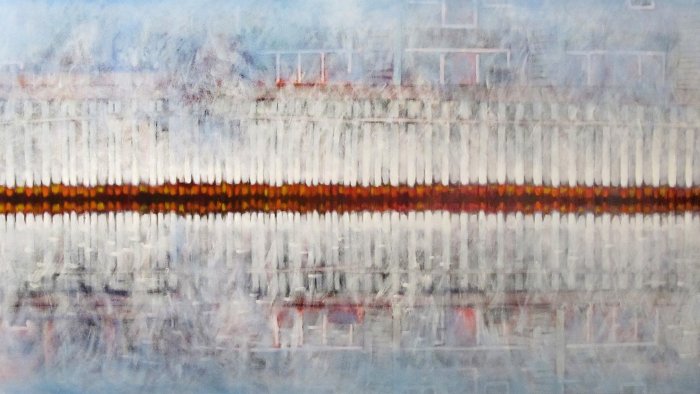 Riverway is a series of paintings based on the walking path along the Courtenay River, so-called ‘shortest river in the world,’ stretching from about Lewis Park to the estuary at the Airpark. The paintings are strongly horizontal, emphasizing the flow of the river and the visual impact of human construction where the water meets the land. Jablonski-Jones is interested in the forms and patterns created by such structures, giving the river a canal-like appearance. Her works emphasize the geometry created by the linear structures and the tide lines, doubled by their reflections in the water.

Martha is a visual artist living in Courtenay. She studied Fine Arts at the University of Alberta, then spent several years as an illustrator. She returned to painting in her late 50’s, leaving Alberta for a live/work studio in east Vancouver where she immersed herself in the urban landscape. Eventually sated by the industrial ambience of the city, the port, and the rail yards, she spent some time in Texas, recharging her colour sense, and then settled in Courtenay, where she continues to explore the human imprint and the structures we have created around ourselves.